It has been reported that Arsenal hero Alan Smith is full of praise for West Ham United striker Diafra Sakho. 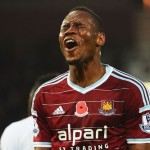 Smith wrote in the Telegraph: “Handing Metz £3.5 million instantly gave Sam Allardyce a striker full of goal threat, a striker who has needed no time at all to settle in the Premier League.

“You cannot say that of many foreign imports. Come to that, you cannot say it of many players in general. In fact, only one other person – step forward Micky Quinn – has managed to notch in his first six Premier League starts.

“The goals, what is more, have satisfyingly come in a variety of ways. Some through sheer pace, some through quick reactions and some from a head that does not shy away from a ball flying into a crowded penalty box. That has got to please Allardyce, in charge of a team with two raiding full-backs entrusted with swinging in enticing crosses.” Per Mertesacker Pleased With Match-Winning Goal Against England