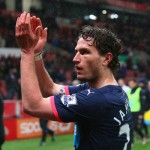 “I think I’m watching possibly the worst team that ever played in the Premier League,” said the former Arsenal man.