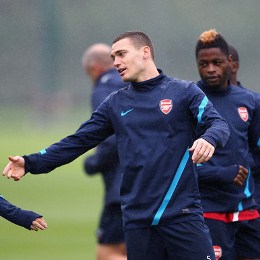 Bad news for all Arsenal fans as the club have been hit with a new injury blow to Thomas Vermaelen.

The Sun has reported that the Belgian international underwent an Achilles op in Sweden.

The 25 year old centre back, who missed virtually all of last term with a similar injury, will be out for at least a month.

The news came 24 hours after England midfielder Jack Wilshere revealed he could be out for two months with an ankle problem.

Vermaelen picked up the injury in the Gunners’ win at Udinese in the Champions League two weeks ago and missed the crushing 8-2 loss at Manchester United.

The former Ajax star pulled out of the Belgium squad and medics told him to rest before deciding if he needed surgery.

Yet Vermaelen yesterday had surgery in Stockholm in the hope of avoiding a long-term nightmare like last season.

Arsenal Boss Wenger Unable To Give Timeframe For Sanchez Absence