Reports are out claiming that Arsenal hero Jens Lehmann has jumped to the defence of Mesut Ozil ahead of today’s World Cup final. 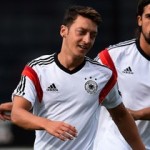 The former German international believes the Arsenal playmaker is the most technically gifted star in Joachim Low’s squad.

He said: “What he gives his stability.

“When you pass the ball to him, he won’t lose it, and he gives nice balls to strikers and midfielders.

“That is why Joachim Low is always relying on him.

“Technically he is the best player in the Germany squad still, and so you know that sooner or later it will come out again”