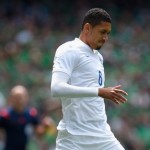 Smalling has enjoyed a brilliant start to the current campaign with Manchester United and the defender also put in a solid performance for the England national team during the 2-0 victory over Switzerland in the European Championship qualifiers on Tuesday night.

Former England defender Keown is a big fan of Smalling’s abilities and following another fine display from the 25-year-old, the ex-Arsenal star is now backing the Red Devils man to stake his claim as the Three Lions’ main central defender.

Keown wrote for the Daily Mail: “Another Manchester United defender shone on Tuesday night too. Chris Smalling is cementing himself as Roy Hodgson’s first-choice centre back.

“England have needed someone to step up since the retirements of John Terry and Rio Ferdinand and the 25-year-old looks to be that man. He was composed all game, snuffing out Switzerland’s attacks with ease.”