It has been reported that former Arsenal defender Martin Keown feels Jack Wilshere is well suited to a central role in England. 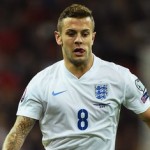 Keown wrote in the Daily Mail: “There was a lot of rotation in the midfield diamond, but Jack Wilshere needs to become the main man in the holding role.

“It used to be a defensive position but players like Andrea Pirlo have made it so technical. Jack is our most technically gifted player so it makes sense for him to play there.

“On Sunday evening he was fluid in attack and was involved all over the pitch, as his touch map (right) shows. He also had more touches (66) in the opposition half than in his own (36).

“That’s fine against 10-man Estonia but there needs to be a balance. Too much rotation and the midfield becomes a carousel that better teams will exploit.”