Reports are out claiming that Arsenal hero Martin Keown says Olivier Giroud isn’t up to the job. 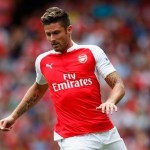 The Gunners have been linked with a move for Real Madrid striker Karim Benzema this summer for a reported fee of £48million.

Keown told talkSPORT: “I would like to see a world class centre forward coming into the club. Someone that really puts the fear of God into the opposing defenders. Someone you can roll it to and they can do the rest.

“I see Giroud as almost like a backboard for midfield players travelling from distance to try and score goals and I think there are times when you have got to role it to the centre forward and he has to be the one that makes the difference.

“Giroud shouldn’t be underestimated. He has a big part to play in Arsenal’s success this season but I’m not sure he is up there with some of the greats that have played in the past.

“That [a world class striker] would take Arsenal to the next level and it would galvanise the group. It raises the bar, the rest of the group become more competitive, and there is real competition for places.”