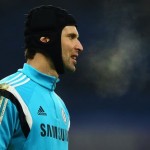 It has been reported that former Arsenal No1 Jens Lehmann says Chelsea goalkeeper Petr Cech is yet to reach his peak.

Jose Mourinho has favoured Thibaut Courtois this term, but Cech has shone when called upon.

Lehmann told talkSPORT: “Courtois is probably the best [young] talent around and he has done really great so far, but in tight games he still has to prove he is up to the challenge of what Petr Cech has done.

“He [Cech] is getting to the best age for a goalkeeper. I have experienced it myself, when all of a sudden physique comes together with experience. The best years are still ahead of him.”