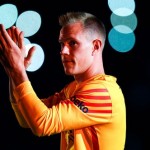 For many, Bayern Munich No1 Manuel Neuer is the best keeper in the world.

But Lehmann rates Ter Stegen ahead of Neuer.

“They are both brilliant, but I think the first (Ter Stegen) is better. Of course, if I had been born ten years later it would be Neuer, my main rival in the national team,” said Lehmann.

Ter Stegen has been handed a Liga start by coach Luis Enrique following an injury to Barca teammate Claudio Bravo.

Paul Merson Slates Arsenal For Only Playing Well When Pressure Off Petr Cech Has Given Arsenal A ‘Calmness’ – Nicholas