It has been reported that Arsenal great Ray Parlour has admitted his adoration for star recruit Alexis Sanchez. 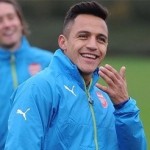 The Chile international forward has scored seven goals from eight Premier League starts since arriving from Barcelona for £32million in the summer for a total of 10 goals from 17 outings in all competitions for the Gunners.

“What an amazing player. I didn’t realise he’d be this good,” said Parlour.

“I watched him in the World Cup for Chile and you saw the potential.

“We knew Cesc Fabregas could do it because he’s done it before, but certainly Sanchez, he’s come in and it really suits him, the Premier League – he’s quick, he’s hustle-bustle, he’s been kicked a few times, he’s got straight back up, he’s chasing balls down.

“I think he’s the nearest I’ve seen to (Luis) Suarez – the work-rate. I always look at players when they’re on the ball, great to see them turn and twist, score goals and set chances up, but I like to see a player off the ball as well, working so hard for his team, and certainly he’s done that this season. And Suarez, that was exactly what he did last year for Liverpool.”