Reports are out claiming that Arsenal’s board see Bayern Munich coach Pep Guardiola as the man to succeed Arsene Wenger. 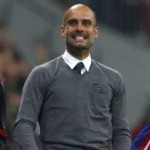 The Daily Star reported that patience is beginning to run out with Wenger at the highest level at the Emirates.

Everton’s Roberto Martinez has also been identified as having the potential to take over from the 66-year-old Frenchman, who has been Arsenal manager for 18 years.

But the Gunners are prepared to dream big and go for ex-Barcelona boss Guardiola, currently at Bayern Munich, if the club’s slump continues.

The former Spanish defensive midfielder has made no secret of his desire to manage in England.

Before revealing in January 2013 he would be taking charge of the German giants he said in a filmed message to the FA: “As a player, I couldn’t realise my dream to play there.

“But I hope in the future I have a challenge to be a coach or a manager there and feel the experience of all the coaches and players that have been there.

“It is unique, to play in that league. I want to feel the supporters, the environment, the media and the style of the players.”