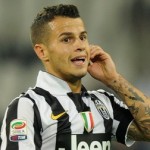 It has been reported that Arsenal are in contact with Juventus attacker Sebastian Giovinco.

The Daily Express reported that the versatile attacker has fallen behind Fernando Llorente, Carlos Tevez and Alvaro Morata in Juventus’ pecking order, and would prove to be a savvy signing if he makes the switch to the Premier League.

The Italian international is out of contract at the end of the season, and Gunners boss Arsene Wenger is planning to bring a forward to the Emirates in January.