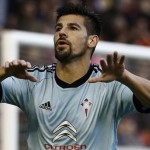 Reports are out claiming that Arsenal are planning to bid for Celta Vigo attacker Nolito.

AS reported that Arsenal will trigger the £12.6million release clause in the contract of Celta Vigo striker Nolito in January.

The Gunners are in pole position to land the in-form forward.

Barcelona are also interested, but Celta would rather sell to a team from a different country rather than a La Liga rival.