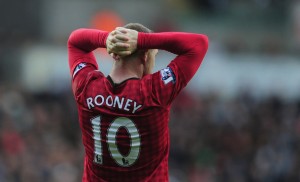 Arsenal are about to do to Utd what Utd did to them, bid for their main striker.

Emirates boss Arsene Wenger is a big admirer of the England striker and is armed with a major transfer budget this summer.

The United striker is bemused at claims that he indicated he wanted to leave United.

His representatives say that is not the case and are now trying to establish the origin of those claims.

But doubt surrounds the England striker’s future and that will be one of the first issues for David Moyes to tackle when he succeeds Sir Alex Ferguson in the summer.

Moyes, of course, was the manager who launched Rooney’s career at Everton.

Arsenal are eyeing the situation, but wages of more than £200,000-a-week and United’s expected reluctance to sell – particularly to another English club – represent major hurdles.

Rooney, meanwhile, is sweating on his place in the United team for today’s match against Swansea at Old Trafford.

It’s the day United are presented with the Premier League trophy – and is also Fergie’s last home game as United manager.

Rooney has regularly been substituted by the United boss over the last few weeks – or started on the bench.


If we finish above Arsenal I will be very happy – Adebayor