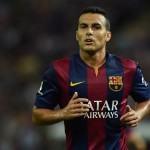 Reports are out claiming that Arsenal are set to make a serious move for Barcelona winger Pedro according to reports.

The Express is of the belief that Arsene Wenger will look to make a £24million move for the 27-year old Spain international when the summer transfer window opens.

Pedro has fallen behind Luis Suarez in the Campo Nou pecking order under Luis Enrique this season and could be given permission to leave the Catalan club.

Wenger is hoping to reunite Pedro with current Gunners ace Alexis Sanchez as he looks to strengthen his squad who essentially lost their title chance after Sunday’s 0-0 draw with Chelsea. Arsenal Will Always Be In My Heart – Alex Song Nurnberg Due Bumper Windfall From Sale Of Ilkay Gundogan To Man Utd, Arsenal