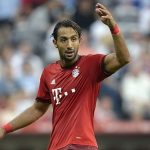 Reports are out claiming that Arsenal are eyeing Bayern Munich defender Medhi Benatia.

The Daily Star says with Gabriel and Per Mertesacker both enduring disappointing seasons, Arsene Wenger wants to recruit a top class partner for Laurent Koscielny.

Benatia has struggled with injuries this season and only started on the bench in Bayern’s 1-0 loss to Atletico Madrid last week.

The 29-year-old also criticised Bayern for their open pursuit of Borussia Dortmund’s Mats Hummels, whose prospective arrival at the Allianz Arena would only push Benatia further down the pecking order in Bavaria.

“I have no problem, if I have to leave Bayern Munich, then I’ll leave, but first I want to end this season well,” he told Sky Sport Italia.

“I am experiencing a very important moment of my career and I won’t be like the club who decided to talk about the transfer market before a Champions League semi-final.” Alex Song : Arsenal Will Be Ready To Fight!