Reports are out claiming that Arsenal are eyeing Chelsea fullback Ola Aina. 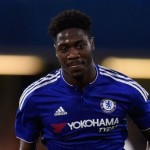 The Mirror says the Gunners are among a clutch of clubs tracking the promising youngster and considering trying to exploit his Chelsea contract wrangle.

And having refused to sign a new deal so far, the 19-year-old has been demoted from Chelsea’s first-team set-up to their U21s, edging him closer to the exit.

Arsenal are keen on a summer move for Aina, with Mathieu Debuchy likely to leave after falling down the pecking order at the Emirates.