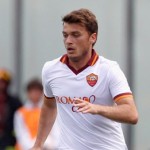 Interesting transfer news are out claiming that Arsenal are being linked with AS Roma midfielder Adem Ljajic.

Calciomercato.com reported that Gunners boss Arsene Wenger is maintaining an interest in Ljajic.

The 22-year-old saw a move to Manchester United collapse back in 2010 over work permit issues but the player would relish a second crack at the Premier League.

Arsenal could use Lukas Podolski as a makeweight in any deal despite Wenger’s insistence the German won’t be sold in this window.