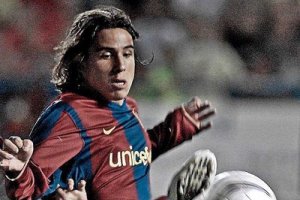 Interesting transfer news are out and it has been reported that Barcelona starlet Gai Assulin is now a target for Premier League club Arsenal.

Local British newspapers have reported that the Gunners are keeping tabs on Barcelona’s speedy Israeli winger.

The 18-year-old, who made his Israel debut at 16, snubbed a move to Chelsea in 2007, but has stalled over signing the new deal on offer to him at the Nou Camp.

He made his debut first-team start in a competitive match of the Copa del Rey against Cultural Leonesa on October 28, 2009, before being replaced by Eric Abidal after 56 minutes.

Gai was called up by the Israel national football team for their friendly match against Chile in 2008. He debuted for Israel by replacing Yossi Benayoun in the 78th minute of the friendly, 14 days before his 17th birthday.

By playing in this match, he broke Ben Sahar’s record for youngest national team debut by 195 days. He was the youngest ever play to play in the national team.