It has been reported that Arsenal are eyeing a swoop for Celta Vigo star Nolito. 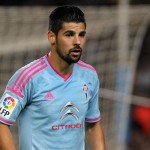 Arsenal were roundly criticised for not bringing in even a single new outfield player over the summer and the Gunners seem to be paying the price for it with plenty of criticism directed their way for not enhancing the squad.

As a result, it is widely believed that Arsenal will rectify things during the reopening of the transfer window in January and according to Fichajes.net, the Gunners are planning a swoop for Nolito who has been recently linked with Catalan giants Barcelona.

It has been suggested that Arsenal are prepared to meet the 28-year-old’s £13.3million release clause.

Thomas Vermaelen Given The Green Light To Face Chelsea