It has been reported that Arsenal are chasing Gremio defender Bressan. 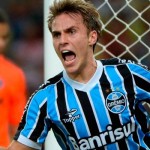 Wenger has held initial talks with Gremio and is planning on sending a representative to Brazil to start swift negotiations.