It has been reported that Arsenal are interested in Juventus defender Leonardo Bonucci. 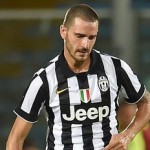 It is said that Gunners boss Arsene Wenger is in the market for a new centre-half signing after selling Thomas Vermaelen to Barcelona.

Tuttosport says he is reviving his interest in Bonucci, having asked about the Italy international before the World Cup.

The 64 year old is shopping abroad for a new centre-half signing and is a big fan of Bonucci.

Bonucci has never managed to nail down a regular start for Juve and would welcome a move to the Gunners given their Champions League qualification.