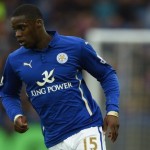 It has been reported that Jeffrey Schlupp is a reported summer target for Arsenal.

According to the Daily Mirror, the 22-year old Leicester City winger is wanted by the Gunners who are being linked with a £5million summer bid.

Ghana international Schlupp, who is comfortable at left-back and on the left side of midfield, made 32 Premier League appearances for the Foxes this term.

The Leicester youth academy product was named the club’s Young Player of the Year after a wonderful 2014/15 campaign in England’s top flight.