It has been reported that Arsenal are chasing Malaga goalkeeper Willy Caballero. 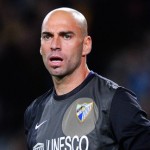 The People claims that Arsene Wenger is plotting a move for Malaga’s highly-rated keeper Caballero.

It is said that the Frenchman has made the signing of a goalkeeper who will give Wojciech Szczesny a run for his money and a right-back to replace Bacary Sagna his top priorities.

And Argentinian stopper Caballero, widely regarded as one of the best keepers in La Liga over the past two seasons, is high on his wanted list.

Wenger has made an initial enquiry about the 32-year-old and is ready to step up his pursuit of the player, who is rated in the £7 million class.

Barcelona Set To Miss Out On Cesc Fabregas