It has been reported that Arsenal are lining up a bid for Real Madrid fullback Alvaro Arbeloa. 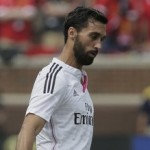 The Daily Express says according to reports in Spain, Real boss Carlo Ancelotti has told Arbeloa that he can leave in January.

Arsenal boss Arsene Wenger is on the lookout for defensive reinforcements in January leading him to move for the versatile 31-year-old.

Arbeloa is an attractive option as he could be grabbed for a knockdown price due to his unhappiness over a lack of playing time.

Arsene Wenger : Adebayor Can Leave If He Wants To