Reports have emerged claiming that Arsenal have registered their interest in Borussia Dortmund striker Pierre-Emerick Aubameyang. 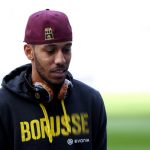 The Daily Mail reported that Aubameyang is a player Arsene Wenger has admired for some time but the days of Arsenal being first in queue when it comes to major signings are long gone.

If Real Madrid, whose transfer ban for the summer has been over-turned, want Aubameyang, he will go there. If United and City decide he is not a target, then Arsenal might have a chance, but it is hard to justify moving from Borussia Dortmund to Arsenal as a step up, other than in financial terms.