Reports are out claiming that Tottenham and Chelsea are being linked with Anzhi Makhachkala midfielder Willian. 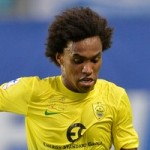 The Mirror revealed that the Brazilian international has been transfer-listed – along with ALL his team-mates – by Anzhi.

Just a week ago, the 24-year-old – who was pursued by Andre Villas-Boas during his time as Chelsea manager and again once he took over at Tottenham – declared he wants to quit the Russian side.

The former Shakhtar Donetsk winger moved to Anzhi for £30million in January, but could now be available for far less than that.

It is said that Arsenal boss Arsene Wenger is also keeping tabs on the player’s situation at the club.