Interesting transfer news are out claiming that Arsenal are ready to trump Chelsea for Atletico Madrid striker Diego Costa. 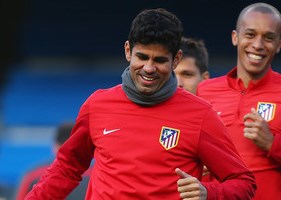 The Mirror reported that the 25-year-old Atletico Madrid star has a £31million release clause in his contract and Chelsea are the hot favourites to sign the Brazilian-born Spain international.

Costa helped put Chelsea out of the Champions League when he scored a penalty in the 3-1 second leg win at Stamford Bridge last Wednesday.

It ensured an all-Madrid final in Lisbon on May 24 after Real demolished current holders Bayern Munich.

Chelsea manager Jose ­Mourinho has made no secret of his ambition to reinforce his front-line during the close season and Costa is at the top of his list.

But Arsenal are also keen and will move in if the move to Chelsea stalls.