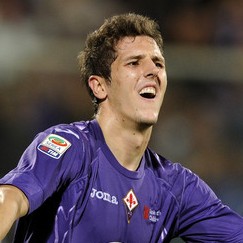 It has been reported that Arsenal boss Arsene Wenger is joining the battle for Fiorentina attacker Stevan Jovetic.

Manchester City are regarded favourites for Jovetic ahead of the January market, while he’s also been a long-term target for Chelsea owner Roman Abramovich.

Wenger has in the region of £35million to splash at the turn of the year and has made a new world-class centre-forward his top priority.

And Jovetic has been on Arsenal’s radar for over 12 months, says the Daily Mail.