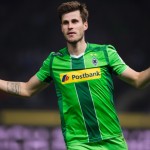 Reports are out claiming that Arsenal have joined the battle for Borussia Monchengladbach midfielder Havard Nordtveit.

BILD reported that in addition to Tottenham and Leicester City, Arsenal are also in contact with Gladbach for the Norwegian.

Gladbach have informed Nordtveit they want to discuss new terms: “We want a decision by the end of February.”

Coach André Schubert also stated: “He is extremely important for us, with his power and passion he leads the boys. In his current form, he always has a place in my starting XI.”

But a return to Arsenal may turn Nordtveit’s head ahead of the summer market.