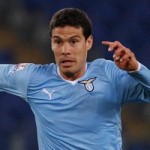 Transfer news are out claiming that Premier League clubs are circling Lazio for midfielder Hernanes.

The player’s agent has confirmed Liverpool’s interest and its emerged Arsenal and Tottenham are also keen.

The 26 year-old Brazilian is reportedly growing frustrated at Lazio, and the Serie A side are considering cashing in on their £16m-rated asset.

The playmaker has impressed since moving to Italy from Sao Paulo two years ago, scoring 17 goals from 56 Serie A appearances.