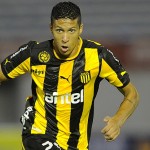 Reports are out claiming that Arsenal have joined the battle for Penarol striker Kevin Mendez.

The exciting Uruguayan talent has been linked with Liverpool, Chelsea and Manchester United this season.

However, TMW claims that Arsenal have approached Penarol about opening talks over a January deal for Mendez. The Gunners want to tie up a transfer in the coming weeks to snatch Mendez’s signing from under the nose of rivals.

“My idol is Andres Iniesta and I like Mesut Özil. Iniesta and Özil are a reference,” Mendez said earlier this season.