It has been reported that Juventus are chasing Tottenham defender Vlad Chiriches. 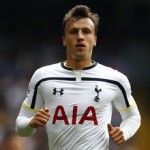 The Daily Star Sunday claims that scouts from the Italian club watched him in action for Romania in their 2-0 win over Northern Ireland in Bucharest on Friday.

And the Italian giants are now preparing a bid to get him on loan with an option to buy at the end of the season.

Mauricio Pochettino is under pressure to trim his Spurs squad so he can bring in new faces after a disappointing start to the season.

And Chiriches, who has only made four appearances so far this season, could be on his way out of White Hart Lane.

Santi Cazorla Determined To Keep On Improving For Arsenal Arsenal Winger Ryo Miyaichi Off And Running With FC Twente