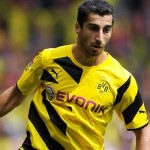 Reports are out claiming that Borussia Dortmund will not be saying goodbye to Henrikh Mkhitaryan.

?The Armenian attacking midfielder, 26, is the subject of interest from Arsenal and Juventus who are both believed to be planning a summer swoop.

?However, Mkhitaryan’s representative Mino Raiola insists the former Shakhtar Donetsk ace is not about to walk out the Westfalenstadion exit door.

?”It’s not a coincidence that he’s signed a long contract, and I don’t think he wants to leave. He wants to achieve important goals with Borussia Dortmund.”???

Wenger : Jack Wilshere Will Not Play For England!

Wenger Warns Bayern Munich : Arsenal Will Go For It!