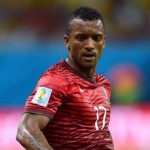 According to reports by BBC Sport, Portugal winger Nani has admitted he could leave Manchester United with other clubs interested in signing him this summer.

The 27-year-old is under contract at Old Trafford until June 2018 but Arsenal have reportedly joined Inter Milan, Juventus and Benfica in the hunt for his services.

“I’m a United player but there has been some interest on my behalf,” Nani said to Portuguese sports newspaper Abola.

“I will evaluate it and decide what is the most advantageous for me. A return to Portugal? Right now I don’t know.”