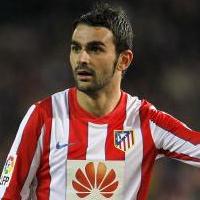 It has been revealed that Arsenal boss Arsene Wenger is keen on Atletico Madrid striker Adrian Lopez.

The Sunday Mirror claims that the Frenchman is ready to take a January gamble by bidding for the man dubbed the “new David Villa” ahead of the old one.

Arsenal made an enquiry about Barcelona striker Villa, but Wenger is worried about splashing out £12m and £100,000-a-week on a 31-year-old.

It means Wenger has prioritised Atletico Madrid’s Adrian Lopez, who has been called a younger version of Villa in Spain.

Lopez has a buyout clause of nearly £15m, but his wage ­demands are ­significantly cheaper than Villa’s and he only turns 25 on January 8.

A source revealed: “Arsenal have asked Barcelona about David Villa, but the manager has a lot of concerns.

“It is looking increasingly likely Adrian is the man he will go for. He is younger version on Villa and will fit into Arsenal’s wage structure.”