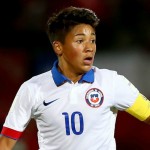 Reports have emerged claiming that Arsenal are reportedly keeping tabs on Chile U-17 captain Marcelo Allende.

The Daily Mail is reporting the 16-year-old impressed club coaches during a two-week trial with the Gunners earlier in the year.

Allende had been playing for Alexis Sanchez’s first club Cobreloa but recently moved to Sports Santa Cruz, where Arsenal have sent scouts to watch him play.

The diminutive midfielder, who stands only 5’4″ tall, was a standout performer for Chile in their run to the FIFA U-17 World Cup Round of 16 last year.

It is understood Sanchez is serving as somewhat of a mentor for Allende and has told the young star to improve his physical strength in order to progress to the next level.