Reports are out claiming that Arsenal boss Arsene Wenger is keeping tabs on Sergi Samper’s form with Barcelona this week. 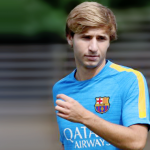 It is said that Samper’s father has held talks with Arsenal in recent days over a move to London.

Wenger is a big fan and knows he can land Samper for a cut-price £8 million thanks to a buyout clause.

The 20 year old defensive midfielder is with Barca in the US and was watched by Gunners’ scouts last week against LA Galaxy.

Samper’s father has made it clear they won’t consider a season in the Spanish Third Division with Barca B.