Reports are out claiming that Arsenal are watching Benfica sensation Goncalo Guedes. 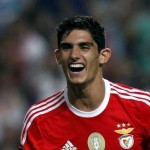 The Daily Star reported that Benfica’s 18-year-old prospect Guedes is a target of Arsenal.

Prising him away from Benfica could prove to be a difficult task, with the teenager’s current contract running until 2021 and him having a lofty £40m buyout clause.