Reports are out claiming that Caen midfielder N’Golo Kante has indicated he is seriously considering a move to the Premier League, with Leicester City believed to be his most likely destination. 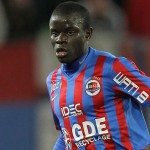 Reports in France are claiming that Leicester have already agreed a £7.8million fee with Kante’s French club, but the deal is yet to be finalised due to the uncertainty surrounding the Foxes’ managerial situation.

Arsenal and Marseille are also believed to be interested in the 24-year-old.

However, following the appointment of former Chelsea boss Claudio Ranieri at the King Power Stadium, Kante has indicated that finalising a deal with Leicester is not a step closer to reality.

“It’s important that they have a coach now – a few days ago, I didn’t know what Leicester was like, as there was no coach,” he told Tendance Ouest.

“For sure, it’s an important factor. For now, anyway, I am in Caen but we will try to resolve the situation with the club and my agents and I hope this matter gets sorted.

“I am in talks with several clubs and I will make my choice later – today nothing is decided.”