Interesting transfer news are out claiming that Arsenal are keeping tabs on Karim Benzema’s contract talks with Real Madrid. 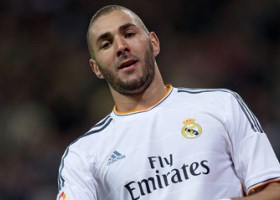 Marca claims that Arsenal, Juventus and Paris St-Germain would be willing to recruit 26-year-old Frenchman Benzema if Real Madrid do not renew the forward’s contract.

The former Lyon striker is now inside the final 18 months of his current deal. Arsenal, Man City To Do Battle For Sevilla Midfielder