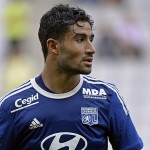 Fekir is rated among the brightest young talents in French football.

The Sun says the 21-year-old has been impressing Gunners boss Arsene Wenger’s scouts this season.

The striker has scored eight times in 20 games for the French side this season, despite regularly being in the shadow of Alexandre Lacazette.