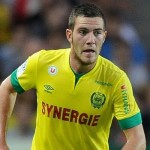 Reports are out claiming that Nantes’ French Under-21 midfielder Jordan Veretout is being tracked by Arsenal.

The Mirror claims that Arsene Wenger is keeping tabs on the 21-year-old after his impressive form this season which is also attracting interest from Inter Milan and Spanish clubs.

Veretout’s contract expires in 2017 and has a buy-out clause of around £4million.

Arsenal do need to bring in reinforcements this January – especially after Arsene Wenger made the astonishing admission that his defence lacks “leadership”.