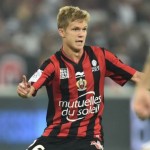 Reports are out claiming that Arsenal are being linked with Nice midfielder Vincent Koziello.

Le 10 Sport reported that the Gunners had scouts posted to check on the 20 year-old in action against Lyon on Friday.

Scouts from Chelsea and Bayer Leverkusen were also present as Koziello produced a goalscoring performance.

Koziello, formerly a Cannes junior, is a France U20 international.