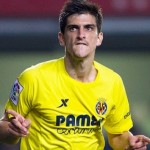 It has been reported that Arsenal are looking at Villarreal striker Gerard Moreno according to reports.

The Daily Mirror is of the belief that the Gunners fancy a summer move for the 23-year old Spaniard who has a year left to run on his current deal at El Madrigal.

Moreno is reportedly available for a fee of just £3million which appears to be good business after scoring 16 goals in all competitions for the Yellow Submarine in the recently-completed season.

It has been suggested that Arsenal are yet to make a move for Moreno but that the former Mallorca loanee has certainly emerged on the radar of the north Londoners. Arsenal Boss Wenger Pleased With The Performance of Monreal, Chambers