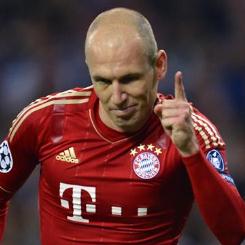 Ex-Chelsea and current Bayern Munich star Arjen Robben fired the first salvo at Arsenal ahead of their Champions league game by claiming the Gunners lack big characters in the dressing room and that close pal Van Persie left to win trophies.

He told The Sun: “Of course you need that but I don’t know whether they have that at Arsenal.

“But in a team you need a good mix of personalities with good characters.

“When I was at Chelsea we had some great characters in the team and that’s something you learn from.

“At the time I was still very young and for my development it was a good experience to work there with such big characters.”

“Yes, Robin was the captain. But that’s also how it goes in football. Players are leaving.

“In the end, of course, for the real Arsenal supporters it was a shame, it was very disappointing that he left the club.

“But on the other hand, if they think clearly, everybody understands his choice that he also wants to win titles and at Arsenal at the moment it’s going to be very difficult.”

Robben added: “I think you can see it. It’s not my opinion, it’s also a fact.

“The last eight years — no trophies. That says it all. If you look around at the moment there are some teams in England that are maybe stronger than Arsenal. I cannot speak for Robin. He made his decision.” Man Utd Drop Out Of Race To Sign Cesc Fabregas