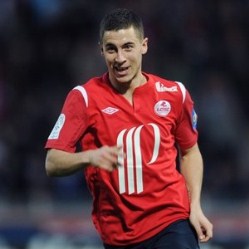 Reports are out claiming that Arsenal have tabled a bid for Lille star Eden Hazard.

The Mirror has reported that Arsene Wenger has finally been pushed into trying to make a dramatic splash in the transfer market.

It is said that the French manager has a bid of £20m-plus in for Hazard, the reigning Ligue Une Player of the Year.

The Belgian international star has been on Wenger’s hit list for more than two years but again Lille do not want to sell and have rebuffed numerous approaches.

However, Arsenal are ready to test Lille’s resolve with serious money and go for one of Europe’s top prospects. Arsenal have already signed Gervinho from Lille this summer.