It has been reported that Arsenal are launching a bid for AS Roma striker Mattia Destro. 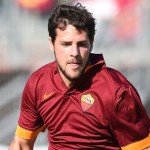 TMW reported that the Gunners have opened informal talks with Destro’s camp about a January move to London.

Destro has also been linked with Chelsea, but it is Arsenal which are pushing Roma to open negotiations over a winter market deal.

Gunners boss Arsene Wenger is driving the bid, seeing Destro’s all-action style as an ideal fit alongside the success of Alexis Sanchez.

For the moment, Roma are yet to respond to Arsenal’s opening approach.