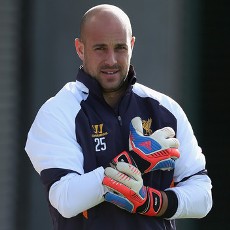 The Daily Express claim that the Gunners have made the Spain international a top goalkeeping target as they look to strengthen in the January transfer window.

It is said that Arsene Wenger wants to sign a proven shot-stopper and Reina features top of his wish-list.

The Frenchman tried to court Reina in the summer of 2010, but a deal fell through and the Liverpool keeper stayed at Anfield.

Reina is known to be a strong character in the Liverpool dressing room and Wenger believes he possesses better distribution skills than Wojciech Szczesny.