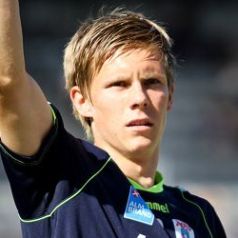 The agent of AGF Aarhus striker Aron Johansson has confirmed the interest of English clubs.

The 21 year old, raised in Iceland but who qualifies for the USA, has been watched by Arsenal chief scout Steve Rowley this season.

Magnus Magnusson Agnar told fotbolltransfers.com : “There is a lot of interest, but I do not think there’s any reason to go into detail yet,”.

“I can confirm that there are clubs in the Premier League, Championship, La Liga, Serie A, Bundesliga, Ligue 1, Eredivisie and Ekstraklasa who have studied him closely in the last few months and I expect that they will continue to do this.”